The axial and radial loads placed on the impeller have an important effect on the reliable operation of a pump. Since the impeller is rigidly connected to the rotor bearings if these loads become too large the excessive bearing heat and shortened life may be experienced.

Typically the pump is designed so that these loads are minimized, but some amount of thrust is inevitable and can be magnified by unfavorable operating conditions.

In this posting, we are discussing the calculation of axial thrust.

To understand and calculate the axial force, it is helpful to divide the force into a number of components. The total axial force results from the sum of each component. Each of the components listed below, with the exception of the 5th & 6th bullets, is caused by the fluid forces on the impeller.

To simplify the discussion, we assume that the pump has an enclosed impeller. For a semi-open impeller, the calculations are slightly different because of the absence of a front shroud.

Several authors have derived formulas that take as an assumption that the fluid in the space rotates at half the speed of the impeller. In the formula below a coefficient C, in the range between 0.5 and 0.75 is given as a starting point. 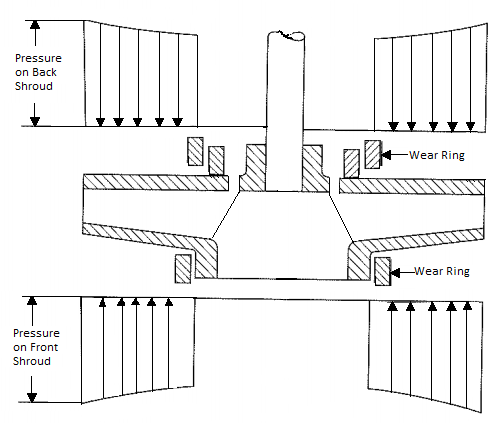 This is calculated in a manner similar to the forces on the front shroud. A complicating factor would be the presence of a rear wear ring or back pump-out vanes. Back pump-out vanes would increase the swirl between the impeller and casing, resulting in a reduction in static pressure. Back wear rings when used with balance holes, will reduce the static pressure behind the associated part of the impeller. 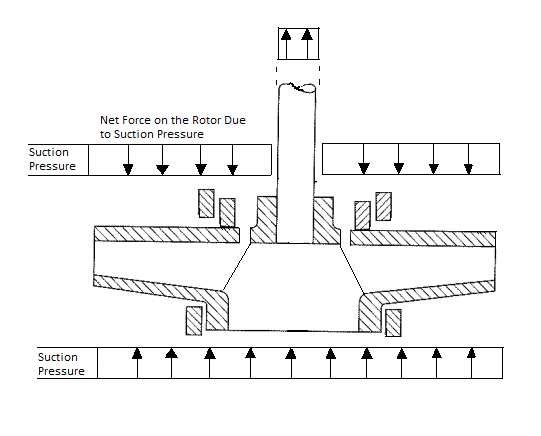 Thrust due to momentum change of Fluid

In a typical end suction pump, the fluid enters the impeller axially then the force of the impeller changes the direction of fluid flow to the radial direction. For most radial flow centrifugal pumps, this amounts to a near 90-degree change in direction.

The component of fluid flow in the axial direction brought to zero and it requires a force to make this happen. This force is directly applied by the impeller. Since force is equal to the rate of change of momentum, we simply need to calculate the momentum coming into the pump per unit time along the axial direction.

As a sanity check, we note that the units of the above formula are mass x length / time2 which is the same as the units of force, giving us extra comfort.

This one often is forgotten. One end of the seal will sit against the casing while the other sits against a ring that is affixed to the shaft. Therefore it is true that the seal spring will apply axial force. Typically the spring will push the rotor away from the motor. The magnitude of the spring force is typically not large.

In the case of vertical pumps, we also have gravity pulling the rotor downwards. In most cases this force is small, however, for long sump pumps and vertical turbine pumps, this force can be significant.

For the vast majority of applications, our designs ensure that axial loads are kept at a low level. However, certain high suction pressure applications may result in a significant reduction in bearing life. Precise calculation of the above forces is important for the design and application of pumps, particularly in challenging environments involving high suction pressure, high flow, or when dealing with heavy rotors for vertical pumps.