Produced Water – What You Need to Know 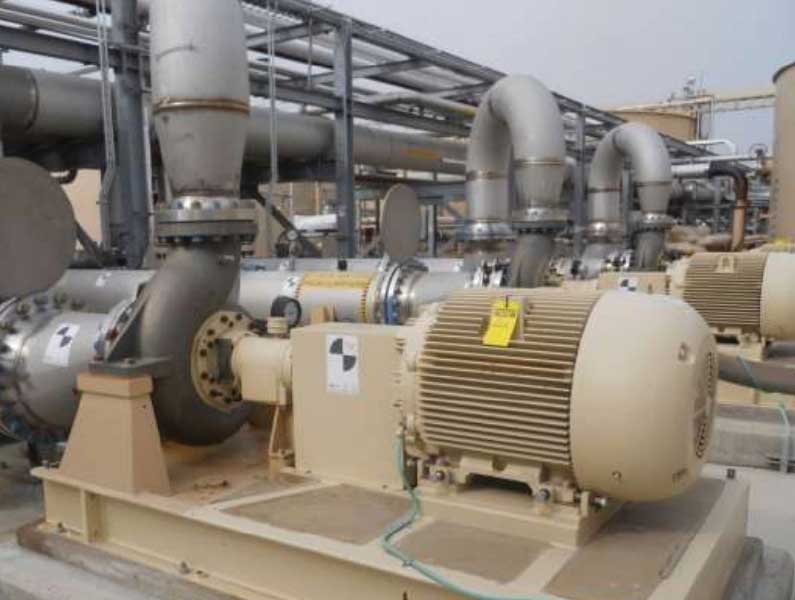 In this article, we are going to take a look at produced water:

We’re also going to have a closer look at the pumps that handle produced water, how to select one, and the best options available for you.

What is Produced Water?

Produced water is a byproduct of oil and gas production. Oil and gas reservoirs often contain plenty of groundwater, creating a slurry when pumped to the surface. Before the oil and gas can be used, the water and any solids mixed in need to be separated and disposed of.

To make matters worse, regulations don’t allow oil companies to dispose of produced water anywhere they prefer. In offshore oil fields, the water must be treated first and pass through environmental guidelines before it can be dumped into the sea.

In an onshore oil field, things get far more complicated. The regulations onshore are more stringent since the hazard of the produced water mixing with drinking water is very real.

Oil companies have to find ways to recycle the water or dispose of it safely. One of the most common methods for this is fracking, which we will look at below.

This is a headache for companies since the cost of managing produced water can get very high. In some instances, whole operations were called off due to there being no feasible way to get rid of the produced water without spending too much.

The composition of produced water varies greatly depending on the rocks it is extracted from. At times, the water can be saltier than seawater (brine), while on others, it will contain hardly any salt.

Aside from salt, other materials of interest on produced water include:

Treatment of produced water involves removing these materials from the water until it is safe for reuse. How pure the water needs to be depends on what the water is going to be used for.

As mentioned above, produced water management is one of the biggest oil and gas industry challenges. To understand why dealing with produced water can cost so much, it is helpful to understand the water treatment technologies needed for safe and compliant disposal or reuse of produced water.

Typical treatment of produced water undergoes three stages, with an optional fourth stage for reusable water. These stages are:

Let’s have a closer look at each one.

Pre-treatment is the first stage. The fluid enters here as a slurry, full of large droplets of oil, gas bubbles, other organic compounds, and, of course, water. Equipment in this stage includes dehydration and storage tanks, strainers, and several others.

The materials are separated from one another through heating, settling, and the use of chemical additives are also sometimes used to help speed up the process.

With the oil and gas separated and the solids discarded, the produced water then goes through several other treatments. The water will still have smaller particles of oil, gas, and solids that need to be removed before it can be reused or discarded.

The primary treatment employs API separators, skim tanks, and a few others, while the secondary treatment uses hydrocyclones, centrifuges, and gas floatation.

These will get rid of the smaller particles that the pre-treatment couldn’t get rid of.

The third and often final stage of treatment is the polishing stage. Here, even the smallest particles are removed from the water. This prepares the water for reinjection (PWRI) into the ground.

The equipment used at this stage is a variety of filters and membranes. They help remove the ultra-small droplets that are found in the water.

In some instances, the water will need to go through a tertiary treatment before it can be used. This is to remove ultra-fine particles mixed in the water.

Produced water is slightly radioactive, and it is considered industrial waste. That is why if it is to be disposed of or used, it must reach strict standards of quality, which includes the tertiary treatment.

In the past, produced water was disposed of into large evaporation ponds. However, due to the environmental risks, this practice is no longer followed.

The disposal of this industrial wastewater differs from offshore and onshore oil fields. Let’s have a quick look at the differences.

In offshore sites, the water can be dumped into the ocean once it has gone through treatment and is safe for sea life. The regulations on the water quality are not as stringent as onshore sites since any remains of oil or radioactive material will be diluted into the sea.

Getting rid of produced water onshore is more challenging than offshore. With the evaporation pond method no longer available, oil and gas companies usually turn to one of three options.

Reinjection is one of the most common way of the three. We will have a closer look at it below.

Underground formations are rock formations underground where the water can be safely stored away. Searching for these formations can sometimes be a challenge, but since dumping the water on the surface is prohibited, this is a necessary step.

The other way to dispose of this water is through beneficial reuse, such as equipment washing. This is when tertiary treatment is necessary. However, disposing of water this way can get very expensive – especially if you wish to turn it into drinking water.

As the natural gas and oil are pumped to the surface, the underground reservoir pressure begins to drop as it empties. Eventually, pumping these materials up from the geological formation becomes difficult.

To combat this – and find a solution to the excess produced water problem – fracking is used.

Fracking is the practice of drilling another opening into the underground reservoir where the gas extraction took place and reinjecting the water. This will not only keep the pressure up but will also force the remaining gas and oil out.

The treatment requirements for water used in fracking are relatively low. Since the water injected is going back to where it came from, the risks are minimal. However, the water is still treated before fracking to extract the valuable oil and gas mixed in it.

Fracking requires a high-pressure pump to inject the treated produced water back down into the ground.

Dealing with produced and flowback water is challenging. If you are to meet the high demands of this operation, high-quality and trustworthy pumps are necessary.

While everyone is familiar with the pumpjack, several other pumps are working in and around gas production wells that are just as important. Some of the key tasks of these pumps are:

Selecting the right pumps is critical in successfully dealing with produced water. You need a pump that is not only right for the job but one that is also reliable.

Here are some of the things to note when selecting a produced water pump.

What to Look For in a Produced Water Pump

The right pump will depend on what you are going to use the pump for. For moving the water from the separator into the treatment, a high volumetric flow, single-stage, and medium pressure pump will work perfectly.

For disposing of the water, multi-stage and high-pressure pumps may perform a better job (especially if you are to reinject the water into the ground).

Flow refers to how much water the pump is moving. It is often measured in GPM (or gallons per minute).

The flow requirements of your system vary significantly on how much water you need to move.

Centrifugal pumps have a hard time pumping water up vertically. That is why calculating the total head of your system is vital. This will allow you to select a pump that can handle your demands.

To calculate the total head, use this equation:

Pressure refers to how much pressure is in the line. For moving water from the separator into the treatment devices, this would be relatively low. In contrast, the pressure in disposing of the water can get very high.

When calculating head, convert the PSI to feet of head using this formula: 1 PSI = 2.31 Head Feet.

Finally, Friction Loss counts how much the flow slows down due to friction with the pipes. Calculating this uses a complex formula. The best way to do this is by using a friction loss calculator.

Best Produced Water Pumps for the Oil and Gas Industry

When selecting a pump for produced water, you can’t take chances. Selecting the wrong pump will cause inefficiencies and increase the cost of what is already an expensive venture.

Aside from the flow, head, material, and mechanical seal specifications, it is also a wise idea to choose a pump from a trusted manufacturer. Ideally, you should select a pump manufacturer that complies with quality regulations such as ISO 9001:2015.

One of the leading manufacturers you can go for is Carver Pump.

Carver Pump is an American pump manufacturer based in Muscatine, Iowa. Carver Pump’s quality management system is certified by Intertek to conform to ISO 9001:2015, so you can be certain that everything they produce is only world-class.

For produced water, you have two excellent options, the Carver Pump OH2 and RS.

The Carver Pump OH2 is an API 610 compliant end-suction pump. It is excellent for gathering and transferring produced water between stations, with high flow rates, up to 11,500 GPM, and heads reaching up to 720 ft.

The OH2 is a single-stage pump, so it isn’t ideal for high-pressure applications. However, for medium and low-pressure requirements, this pump will get the job done for you.

For high-pressure applications, using a multi-stage ring section pump is a better choice.

Carver Pump’s RS is designed for high-pressure pumping. In some instances, it may even handle the reinjection of produced water into the ground for fracking.

As the water flows through the multiple stages within the pump, it continuously builds more and more pressure. By the time it gets to the discharge, the pressure will already be strong enough to be reinjected into the ground.

Since 1938, Carver Pump has been building world-class centrifugal pumps for the most demanding engineering specifications and military standards. Headquartered in Muscatine, Iowa, all Carver Pump pumps are proudly American engineered and manufactured.

As one of the first pump companies to be certified by Intertek to conform to ISO 9001:2015 – the ultimate standard in the world – Carver Pump boasts outstanding quality, superior customer service, state-of-the-art research and development, and continuous improvement in everything they do.

Whether your job is fueling cargo ships, supplying paint to an auto assembly line, or bringing water to the fountain in a city park, you can trust Carver Pump to get the job done.